Reckoning: Gnarls Barkley at the 9:30 Club 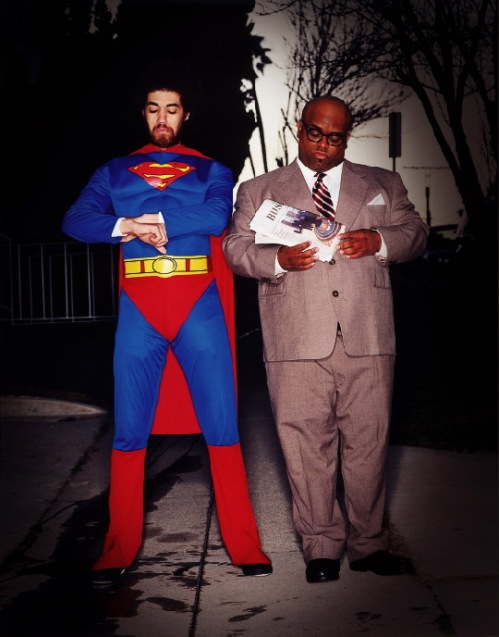 Usually when you’re going to see an act with a two-album catalogue, the question of “What will they play?” doesn’t come up. Then again, most acts don’t score a massive hit with a pop-soul confection about the sweet relief of relinquishing your sanity. (Google “Crazy,” “Gnarls Barkley,” “2006,” “ubiquitous.”) Gnarls Barkley — vocalist-shaman Cee-Lo Green and aural scenarist Danger Mouse — dutifully checked off “Crazy” at their sold-out 9:30 Club show Tuesday night, but more exciting was their weirdly faithful cover of Radiohead’s “Reckoner,” a late-inning curve in a strong 75-minute show that otherwise couldn’t help but disappoint a little in its ordinariness.

Good-to-great tunes, performed with verve and emotion? Mos def. But where was the bling? If ever a group cried out for bombast — a Mothership, a Mirrorball Lemon, some eyebrow-singeing pyrotechnics, an 18-foot (or 18 inch) model of Stonehenge — it’s this one. Mix Gnarls’ songbook with Coldplay’s A/V committee and you’d really have something.

“Surprise” had a sunny New Pornographers vibe, and the energy climbed higher with Violent Femmes’s “Gone Daddy Gone” and “Run.” But longish tween-song pauses sapped momentum. Even Gnarls’ sartorial swagger was muted: Green has been known to perform in Roman solider’s togs or an outsized pompadour wig. But he and Mouse could have been in the Temptations with their spangly sport jackets and gold lame ties.

“In in the mood for some old-fashioned rock and roll” Green squeaked before an angular, crunchy “Whatever.” That described much of the evening’s music, but “Transformer” got a downbeat acoustic re-fit, and the main-set closing “A Little Better” was tricked out with off-kilter syncopation.

It rocked, it rolled, it spooked, it cooed. I just wish it had been, well, crazier. Does that make me, um . . . picky? Prob-bab-bleeeeeeeeeeeeee . . .

A slightly abridged version of this review appears in today’s Paper of Record.

14 Who’s Gonna Save My Soul

One response to “Reckoning: Gnarls Barkley at the 9:30 Club”