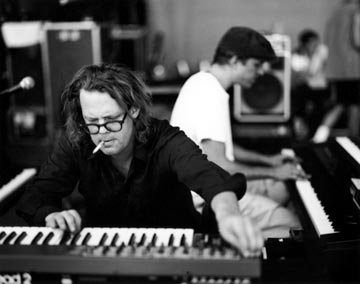 Jay Bennett died on Saturday night. He was, I am increasingly convinced, the source of much of what I love about Wilco’s music, as the five albums made with his input — 1996’s Being There through 2001’s yankee hotel foxtrot — are the ones to which I always return. The records Wilco made on either side of the Jay Bennett era haven’t moved me nearly as much.

I attribute this more to Bennett’s pop sensibility and studio wizardry, which made a song like “Secret of the Sea” from Mermaid Ave. Vol. II what it was, than to his lead guitar work, which was, if more traditional than Jeff Tweedy’s, also a lot more fun to hear. According to the two most complete accounts of which I’m aware — Sam Jones’s 2002 documentary I Am Trying to Break Your Heart and Greg Kot’s 2004 book Wilco: Learning How to Die — it was this same, obsessive virtuosity in the studio that exhausted the patience of Bennett’s bandmates. Particuarly Tweedy, who would send Bennett on his way while work on yankee hotel foxtrot was still progressing, telling him (reports Kot), “a circle can only have one center.”

I haven’t paid much mind to Bennett’s four post-Wilco albums, so it’s not as if I’ve been carrying his torch. Perhaps I’ll check them out now. Kot already linked to a month-old MySpace post wherein Bennett recounted his alarming discovery that he needed hip replacement surgery and fretted over how he’d pay for it without health insurance.

Sad, that the final days of a man who contributed so much to the development of one of the most important bands of his era had to be filled with thoughts on so prosaic and dispiriting a topic. And yet he seemed upbeat and courageous about his future. I hope he still is.

One Hundred Years from Now, from Return of the Grievous Angel: A Tribute to Graham Parsons (1999)

ELT and My Darling, appearing sequentially on summerteeth (1999)

*sans anything from Titanic Love Affair or his post-Wilco solo catalogue because I just don’t know those records. Sorry, Jay.