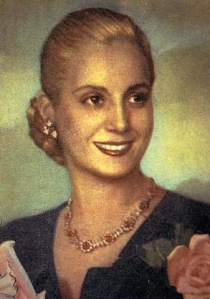 Remember Evita, Andrew Lloyd Webber’s 70s bio-musical about the beloved Argentine political icon Eva Perón? Cinema-tized with Madonna in the 90s? No? Well, it did tend to linger on the relatively dull early section of Perón’s story: the part where she’s alive.

It turns out that when Perón traded cancer for immortality at the martyrdom-enabling age of 33, her role in steering her country’s future was just beginning.

Her husband, President Juan Perón, had her body mummified and planned to store it in an opulent mausoleum — one that remained incomplete when his government was overthrown in 1955. The architects of the coup feared that Evita’s corpse might be trenchant enough a symbol to rally the people against them.

So they hid her. For years. Eventually, a Colonel in the junta fell in love with Evita — her mummy, that is — and claimed it was carrying his child. Understandably, his bosses took the mummy back. More puzzlingly, they stashed it in a non-metaphorical closet for a couple of years before eventually getting the Vatican to help them smuggle the body to Italy.

And at this point, the tale gets a little weird.

“It feels like a story Monty Python could have told,” acknowledges Mariano Caligaris, director of a new musical comedy recounting Evita’s posthumous exploits that makes its world premiere at GALA Hispanic Theatre next week. Entitled Mummy in the Closet: The Return of Eva Perón, the show attempts a tonal balancing act similar to the one happening in Stephen Sondheim’s tuneful profile of president-slayers, Assassins — it aims to be a whimsical, if macabre, retelling of tragic events. There’s even a zombie number.

The story continues! Read it in its glorious entirety here, or, if you’re the old-fashioned type, in the Weekend section of tomorrow’s Paper of Record.