Shut Up and Swing: (The Top Half of) Travis at Jammin’ Java 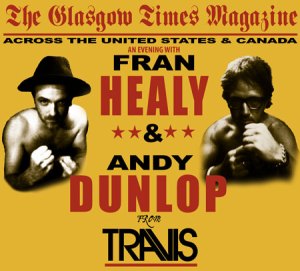 More than ever on the concert circuit, nostalgia is the move. With everyone from Liz Phair to Public Enemy to The Pixies (and those are just the P’s) devoting gigs and sometimes entire tours to reviving their seminal albums in sequence, lots of long-lived performers — particularly those strugging to get even their cult to embrace their new music — have glommed to the trend.

Travis are in a reflective mood, too, but they’re taking a different route. Founded in Glasgow in the early 1990s, they were one of the better U.K. trad-rock outfits to arise in Oasis’s mid-90s wake. They’re hardly commercial rivals (or contemporaries) of classic-album-revivalists Bruce Springsteen or The Pixies, but they’ve more hummable, singalong-enabled tunes to their credit than you probably remember, if you remember them at all.

At a sold-out Jammin’ Java last night, the group’s melodic half — that’d be frontman/songwriter Fran Healy and guitarist Andy Dunlop — day-tripped chronologically through a decade-and-a-half of their catalog, beginning with “20” — the oldest song Healy will own to having written — and working up to “Holiday” from this year. There isn’t a lot of variety in the Travis matrix, but their sparkly mid-tempo balladry remains as ideally suited to unvarnished arrangements in small rooms as it was to mixtapes for would-be girlfriends in the years just before cassettes disappeared.

The charismatic Healy explicated at length on the origin of each song, sometimes with visual aids courtesy of iPhoto. If a slide of the nuclear power station outside the window of the room where he wrote “All I Wanna Do Is Rock” in the summer of ’95 doesn’t really illuminate the tune, it’s still a novel variation on the chatty, intimate acoustic tours that Springsteen and Elvis Costello, among others, have staged at various points in their long careers.

Though necessarily less kinetic than gigs featuring a rhythm section, these sorts of evenings offer both artist and audience a chance to give the songbook a closer inspection, and perhaps to a embrace a tune that never connected in a more formal arrangement. And while a great song never requires explanation, it can’t be reduced by one, either. After all, ask someone to buy a second album from you, and you’re effectively selling your biography. That Travis’s “Sing” was at first called — wait for it — “Swing” is less a cocktail story, maybe, than the old saw that Paul Fucking McCartney (as Healy captioned the ex-Beatle in his slideshow) sang “Ham and Eggs” to the melody of “Yesterday” before he hit upon the lyric we all know. But it’s still fun to hear an artist of Healy’s skill so eager to share how the sausage is made.

By the time the pair wrapped up their set with a trio of audience requests, they’d been on for more than two-and-a-half hours. Afterward, you could pick up the tour’s “Official Bootleg” CD for $10, capturing key songs and anecdotes from earlier dates on the itinerary. Nostalgia, it turns out, is also sometimes a bargain.

This review appears today on DCist.

One response to “Shut Up and Swing: (The Top Half of) Travis at Jammin’ Java”