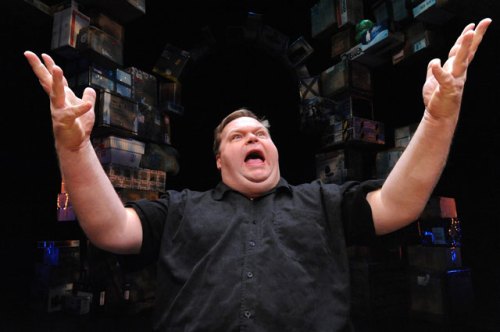 Mike Daisey has a money problem.

It isn’t that he has too little, or, God knows, too much. To hear the 36-year-old raconteur tell it, his money problem is the same one that afflicts us all.

“Money — currency — is corrosive to human relationships,” he says flatly. “It corrodes the human connections that create communities, and replaces them with fiduciary connections.”

Strange talk from a man who once made his living as a business development executive for Amazon, an experience he chronicled in his 2002 monologue and memoir of the late-90s tech bubble, 21 Dog Years. But on a break from preparations at Woolly Mammoth Theatre Company, four days before his latest solo show opens here, Daisey has the confidence of certainty, however provocative his premise. Even in what is ostensibly an informal chat, he unspools his argument in lucid, flowing paragraphs, seldom restarting a sentence the way amateur conversationalists are prone to do.

Of course, Daisey is no amateur. Since 21 Dog Years put him on the map, and on The Late Show with David Letterman, his dozen-plus semi-improvisational monologues have solidified his rep as one of the most imaginative and entrancing talkers in America.

The title of his new one, The Last Cargo Cult, suggests an “Indiana Jones” adventure more than it does a treatise on how the global financial crisis happened and why it’s probably going to happen again. And by Daisey standards at least, it does offer something of the visual lure of a would-be blockbuster.

I find Daisey standing in the back row at Woolly, taking in his opus’s still-under-construction set, a temple-like structure of stacked boxes. He won’t be landing any helicopters on stage, but it’s still a new thing for a Daisey monologue to have a visual element beyond that of a man who with his smooth, round face and body resembles a Buddha wearing a toupee, seated at table with a sheaf of papers and a glass of water. When I mention the set, he says, “I prefer to think of it as an environment.” He points out that all the boxes are real packaging from real consumables, Apple computers and strollers and DVD players.

Woolly audiences who saw Daisey perform 2008’s If You See Something, Say Something, a riff on post-9/11 hysteria, or last year’s How Theatre Failed America, about, er, how playhouses are flailing to renew their aging audience base, know he has a rare aptitude for distilling complicated matters into relatable human moments.

Like his other monologues, Cargo Cult is directed by his wife, Jean-Michele Gregory. He points out that the show was born here at Woolly in two workshop performances last summer.

The verb is deliberate — Daisey speaks of his monologues as though they’re children. “They keep warping and twisting and shifting, like organic things.” He works from outlines, but never a full script, forcing light operators to takes cues from his page turns or his gestures, which — curiously for so garrulous a fellow — tend to lock in place from night to night more than his words do. Following the two test performances at Woolly, full runs in Portland, Ore. and New York City matured the show. “It’s a young adult now, with a job and an apartment and obligations,” says Daisey.

Rearing this peculiar child tested even his mighty tale-telling prowess. Making a compelling story out of high finance turns out to be just as tough as it sounds.

“They call economics ‘the dismal science,’” Daisey says. “That’s not an error. It is unpleasant to study, and not particularly evocative. It has the complexity of biology and chemistry, but it lacks the grandeur of being beyond the mind of man.”

Before he decided to build a show around it, he’d had “a fair layman’s understanding of macroeconomics.” He’d read The Economist, but not The General Theory of Economics. So he assigned himself homework. “What I’ve discovered is that economics is singularly ill-equipped to deal with the actual, human questions of what we’re doing, why we’re here, and what we want,” he continues. On to Page 2.