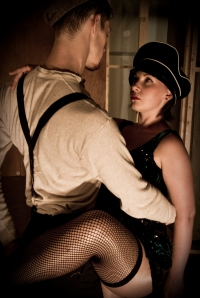 Gentle reader, if you’re anything like me, you’ve often lamented the manifold ways in which the theater consistently fails to evoke the experience of watching a great, droll black-and-white thriller, like The Third Man, let us say, or else an episode of the most delightful TV spy show in the history of televised espionage, The Avengers. Happily, the operatives responsible for Improbable Frequency— a surefooted, fast-talking WWII trenchcoat-and-dagger musical comedy from the reliable Irish-import company Solas Nua — have given bold remedy to this problem. The five-year-old outfit, best known for gritty (if heightened) naturalism, has now made a limber, sexy, generally spectacular first entry into the song-and-dance game, and while the result could only benefit from a two-to-four-song song shearing, the delight it brings to those tuned into its bizarro, ah, wavelength is irreducible.

And who is that? Well, the pun-averse are advised to stay well away. And the fun-averse, obviously! Also, anyone whose ears are easily fatigued by uncommonly dextrous feats of verbal derring-do. Everybody else? Game on, for Queen and Country.

Eric Messner executes an Olympian feat of talking, (and, like most of the cast, a lesser one of singing) as our affable, lantern-jawed hero, Mr. Tristram Faraday, — a well-meaning if easily-seduced sort whose skill with a crossword gets him drafted into Her Majesty’s Secret Service as a codebreaker. He’s dispatched to Dublin to investigate a radio station whose playlist each evening uncannily predicts the following day’s weather — useful information for Luftwaffe bomber pilots. (This is exactly, exactly the sort of admirably wack-ass premise that powered all the best Avengers episodes.) Ireland is officially neutral (and vulnerable), but there’s an armed, contingent within that regards any enemy of the Brits as an ally. So it’s a tall order for our man Faraday, made taller by the appearance of an old flame of opaque allegience (femme Madeleine Carr, fatale-ing it up to 11). Soon he’s also caught the dewy eye of local gal Philomena O’Shea (Stacey Jackson.) Gentlemen, we should all have such problems.

Dramatist Arthur Riordan took his inspiration from two too-delicious facts: the British poet John Betjeman really was sent to Dublin on spy business in 1941. At the same time, Nobel-winning Austrian physicist Erwen Shrodinger had accepted an invitation from the Irish prime minister to found up the Dublin Institute for Advanced Studies. Betjeman, as portrayed here by the versatile Chris Davenport, is a Union Jack-wearing, Teddy bear-clutching Jim Broadbent type who pivots and struts like a windup toy. Cyle Durkee’s Schrodinger is a horndog so irrepressible you wonder when he finds time to work on the improbable device that serves as the plot’s MacGuffin. The songs by Bell Helicopter, the Irish band that also provides live accompaniment, are mostly in period dance hall style, but also recall the early work of another Englishman who emigrated to Dublin, Elvis Costello, in the way they pack too many clever syllables per line and are often just beyond the vocal reach of the person singing them. Q: Is this a problem? A: It is not.

Staging the play on the vacant sixth floor of a K Street NE office tower done up to evoke a war-years cabaret (with tables but without drinks, sadly, at least at the first performance), director Matt Torney and scenic and lightning designers Richard Montgomery and Marianne Meadows conjure up a noirish atmosphere that sustains even when the tone goes full-on Muppet Show. The unconventional setting allows them a depth of field used to stirring effect during the sci-fi climax, while also giving the performers leave to infiltrate the audience. With a couple of exceptions, the company members are better actors than they are singers or dancers, but there’s genuine delight in watching them scrap through those verbose tunes and Diane Coburn Bruning’s complicated dance steps. Like all the best spies, they’re charming and adaptable, and they’ll do whatever it takes.

A slightly shorter version of this review appears in today’s Washington City Paper.