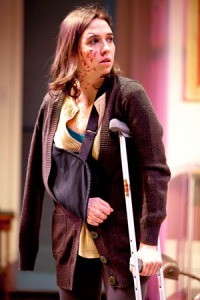 The Studio Theater has kicked off 2012 right with a fine production of Donald Margulies’s Time Stands Still, a drama about two journalists’ uneasy return to domesticated life after separate injuries send them home from the field.

What I ran out of room to say in my Washington City Paper review is that the book the character played by Greg McFadden starts working on during his convalescence, an examination of the political subtext of horror cinema, sounds an awful lot like Shock Value, the one published by the New York Times’s Jason Zinoman — son of Studio Theater founder Joy Zinoman — last summer.

Margulies’s play debuted in 2009, and it’s not like reading the zeitgeist via genre films is all that original an idea, but it’s still a peculiar coincidence. I haven’t read Shock Value yet, but I’m looking forward to it.