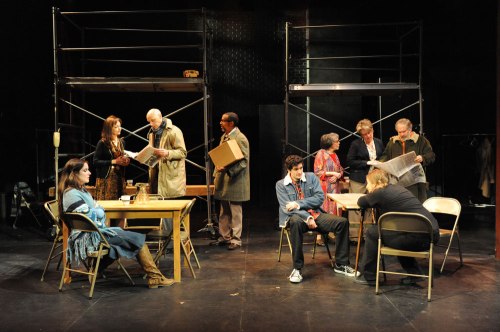 Some kind of technical problem prevented a chunk of this week’s Washington City Paper from being posted online. My review of Darrah Cloud’s play Our Suburb at Theater J was among that chunk, so I’m posting the full text of the review here.

Writer Darrah Cloud’s Internet Movie Database page indicates she was once a prolific imagineer of made-for-TV movies: A Christmas Romance, A Holiday for Love, A Holiday Romance, The Sons of Mistletoe, and — shades of intrigue! — Undercover Christmas. I haven’t seen those films, but the titles imply the sort of cornball mawkishness that some people — specifically, people who are very wrong — associate with Thornton Wilder’s oft-revived, Pulitzer-winning 1938 play, Our Town.

Our Suburb is Cloud’s riff on Wilder’s classic in the way that Aaron Posner’s Stupid Fucking Bird was a reworking of Anton Chekhov’s The Seagull, only she isn’t debating her source material the way Posner’s thrilling play did. She’s moved the action — well, “action;” she’s kept Wilder’s sense of life as a sequence of mostly prosaic moments that we are tragically incapable of appreciating   —  from the fictitious hamlet of Grover’s Corners, New Hampshire in the early years of the 20th century to her native Chicago suburb of Skokie, Illinois, about 75 years later. There we follow three households, alike in rigorously striving dignity: The white Majors, and black Minors, and the Jewish Edelmans.

It’s shaggy and a little soulful and a whole lot less didactic than it sounds. Mrs. Edelman (Barbara Pinolini) is putting herself through law school and explaining to her mother, (Barbara Rappaport) a Holocaust survivor, why the neo-Nazis must be allowed to petition for the right to march. (This part really happened, resulting in a 1977 Supreme Court ruling and inspiring the many jokes at the expense of “illinois Nazis” in the Chicago-set film The Blues Brothers three years later.) L.C. (James J. Johnson), an entrepreneur who’s forever submitting Republican op-eds to the Tribune and the Sun-Times urging his fellow black men to pull themselves up by their bootstraps, seems to carry a torch for Mrs. Major (Kathryn Kelley), who’s drowning in wine and ennui. In the play’s loveliest passage, L.C. calls her to play a new piano composition he’s learned over the phone. She listens, intentionally silent while in a parallel phone conversation, her bookish teenage daughter Thornton (though Mrs. Major and her taciturn husband don’t seem the type to do that to a kid) and Ricky, the Edelman boy, fumble for things to say. (Sarah Taurchini and Joshua Dick don’t overdo the awkwardness of their teenage love affair.)

Elsewhere, director Judith Ivey seems less in control of the material. Comic opportunities that go unexploited, and when Cloud rewrites the existential third act of Wilder’s play to reflect the expanded presence of violence in American life, or our expanded awareness thereof, she isn’t quite sure how to present that harsh tonal shift.

Cloud has transformed Stage Manager who narrates Wilder’s play from an avuncular bowtie-and-suspenders type into a, well, stage manager, replate with headset radio, clipboard, and period-appropriate Led Zeppelin T-shirt. Jjana Valentiner puts on a Chicago accent for the role (no one else does), punctuating her monologues with verbal light and sound cues and frowning that she’s not earning any extra pay for being double-cast as the youngest daughter of the Minor family.

Samini Vieth’s set design reinforces this emphasis on theatrical artifice: Two unadorned scaffolds represent the Major and Minor homes. And yet when we see Ricky working in his Dad’s kosher butcher shop while lamenting that “meat is wasted death”, it appears to be a real hunk of beef he’s slicing.

That’s how the play is: Sometimes abstract, sometimes naturalistic, and not above resorting to the Rolling Stones’ “Wild Horses” to suggest the sad ephemerality of all things. I can’t argue with that song, or with Our Town, and in the end there isn’t very much I want to argue with here, either. It’s a unsteady companion piece to a classic with moments that feel purely original.