Planet Bard: NOW: In the Wings on a World Stage, reviewed. 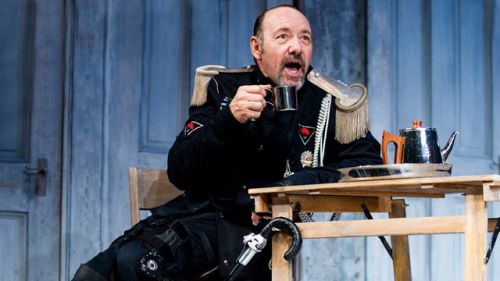 Over on The Dissolve today, I review the documentary-with-pretentious-title NOW: In the Wings on a World Stage, about the Bridge Theatre Project’s globetrotting Sam Mendes-directed, Kevin Spacey-starring Richard III.

I couldn’t use this in my review, but it demonstrates the Herculean rigor of my research and/or how much of my own time I’m willing to waste: In one of the film’s performance clips we hear Spacey conclude a speech, “Counting myself but bad ‘til I be best.” I just saw Richard III at the Folger Theater a few months back (here’s my review), and I didn’t remember that line. Turns out it belongs to Richard III but comes from Henry VI, Part 3, suggesting Mendes & Co. incorporated some material from other plays into their text, a common practice. The film never mentions they did it, though.

Minutes after we watch Spacey do the line in performance, we see a rehearsal clip where he delivers it in a dead-on impersonation of President Clinton.