Back to the Future (Past), or You Can’t Keep a Good X-Man Down 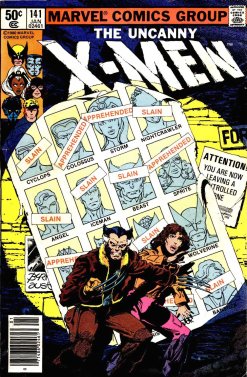 I enjoyed X-Men: Days of Future Past, Bryan Singer’s return after a decade-long absence to the surprisingly resilient superhero franchise he originated. This movie is based on a 1981 story from The Uncanny X-Men comic book that I first read when it was reprinted in probably 1989 or 1990.

The movie alters the tale as necessary to unite the cast of 2011’s 60s-set X-Men: First Class with the players from the earlier X-pictures, set in the present day — or rather, as a title card at the top of 2000’s X-Men tells us, “the not-too-distant future.” I’d feared this timeline-straddling — Days of Future Past is set in some unspecified year in the 2020s, -ish, and in 1973 — might make the movie as dull and incoherent as the Star Wars prequels, but it’s funny and light on its feet.

This time-travel movie triggered some sympathetic time-travel on my part. I bought my first issue of X-Men in the summer of 1988, and I stuck with the title for about four years after that. Since then, I’ve looked in on the X-Men infrequently, whenever I’ve heard that Grant Morrison or Joss Whedon or Matt Fraction was up to something interesting with them.

Anyway. For NPR, some ruminations on how time-travel helps to keep long-running movie franchises fresh.

SEE ALSO: Another thing I wrote for NPR, about a quite different time-travel flick last year.