Freud Where Prohibited: The Last Days of Judas Iscariot and Freud’s Last Session, reviewed, plus some Frank (Britton) discussion. 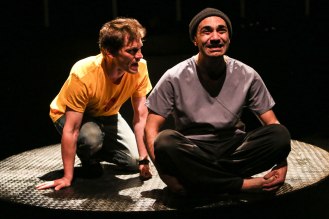 In today’s Washington City Paper, I review two plays that mull over free will and the existence of God, both of which feature Sigmund Freud as a character. The better of the pair, Stephen Adly Guirgis’ The Last Days of Judas Iscariot, features a towering performance from Frank Britton as Pontius Pilate.

Around 2:15 Tuesday morning, after he’d left the cast party that followed Judas‘ opening-night performance, Britton was assaulted and robbed by four or five unidentified attackers near the Silver Spring Metro stop. He underwent surgery at Holy Cross Hospital to treat a broken cheekbone. Britton does not have medical insurance. A crowdfunding campaign to cover his hospital bills (donate here) has raised over $45,000 so far.

I’ve known Frank for years. I think we first met in 2008, when my then-girlfriend was in a production of Temptation with him at Constellation Theatre Company, but it might’ve been earlier than that. Everyone I know who’s involved with theatre in DC loves him. He’s a talented, hardworking, generous artist.

He’s going to miss at least a couple of performances of Judas Iscariot as a result of his injuries, which is a shame, because I’ve never seen him in anything where he was better. (Thony Mena, who already appears in the show as Simon the Zealot and other characters, will stand in for him.) Michael Dove, the artistic director of Forum Theatre, the company producing the show, visited Frank in the hospital Tuesday and reported him to be in high spirits and eager to get back to work. I hope he will, soon. His current project is a stirring production of a funny, provocative play, and Frank is a huge part of why it’s so powerful.

Unfortunately, the production photos Forum made available for Judas do not include any shots of Frank as Pontius Pilate. You’ll just have to go see the show, which you should do anyway, if great, intimate theatre is a thing that matters to you. It’s at Round House Theatre Silver Spring, next to the AFI Silver Theatre cinema, through June 14.

UPDATE: My pal Rachel Manteuffel, who saw Judas Iscariot with me on Sunday, has pointed out I erred in my WCP review when I said that Annie Houston is silent throughout the play after her (excellent) opening monologue. In fact, she has another scene where she is called to the witness stand to testify against her son. As I said, it’s a long show! I apologize for my mistake.