(My Contributions to) The Dissolve‘s 50 Greatest Summer Blockbusters

Spock’s final farewell to his old buddy Jim, from “Star Trek II: The Wrath of Khan.” 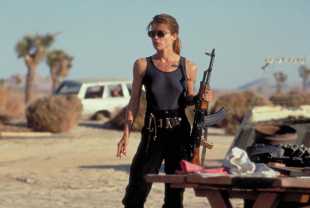 Tom Cruise in “Minority Report.” Spielberg’s most Hitchcockian film was all about not being able to trust your eyes.

Ricardo Montalban’s Khan was the grandest of “Star Trek” villains.

It’s only July 1, but thanks to the ever-accelerating start date of the summer movie season — it kicked off the first weekend of April this year, when Captain America: The Winter Soldier came out — summer movies are done. I still want to see Snowpiercer, which will roll out to Washington, DC this week, but the less-than-enthusiastic early notices from critics I respect has tempered my enthusiasm for that. There’s no Dark Knight coming in two weeks. There’s no Terminator 2: Judgment Day opening at midnight tomorrow night. Does that sadden me? It does, a little! Shut up.

Anyway, I was honored to be one of a dozen critics who determined — through three rounds of voting — the 50 Greatest Summer Blockbusters for The Dissolve. Numbers 50-31 were posted yesterday; 30-11 went up today. Tomorrow you’ll all find out what we deemed the Top Ten.

I had the honor of writing the entires for three of my favorites: Steven Spielberg‘s Minority Report, from 2002, which placed 46th; Nic Meyer‘s Star Trek II: The Wrath of Khan, from 1982, which placed 37th; and at lucky no. 13, James Cameron‘s Terminator 2: Judgment Day, which is probably my personal all-time favorite summer movie. (I still love you, Jaws, but so does everyone else, and you arrived before I did. Whereas I had the experience of discovering T2‘s greatness at the same as the rest of the world.)

The process of choosing our 50 from the initial list of 655, I think it was, was fairly agonizing. Like any exercise is winnowing, it forces you to examine your priorities in art. I’ll probably try to write about that this week. UPDATE: I did write about it.