Aniello, I Love You, Won’t You Tell Me Your Name? 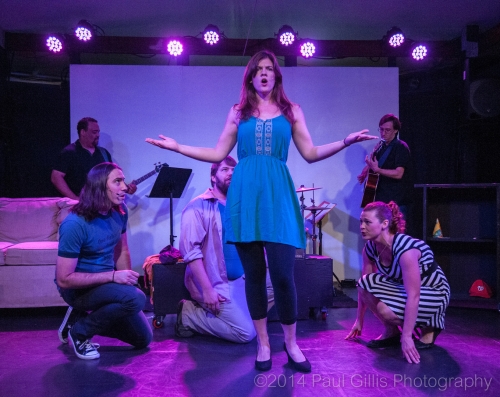 Vaughn Irving, Doug Wilder, Farrell Parker, and Suzanne Edgar perform their musical “You, or Whatever I Can Get” in the 2014 Capital Fringe Festival. 2015 Aniello Award winner Flying V will remount the show starting next week. (Paul Gillis)

After covering theater in DC on a regular basis for seven or eight years, it’s clear to me that what I like and what Helen Hayes Awards judges like sometimes overlap but more often do not. But I very much appreciate that the Haysies created a new award eight years ago in the name of longtime DC theatre patron John Laurentzen Aniello Jr. to recognize outstanding start-up theatre companies, because making good art is difficult, difficult, lemon difficult and keeping a theatre company afloat ain’t so easy, either.

I wrote a feature about the Aniello Award and its recent winners for the Washington City Paper. My sincere, red-faced apologies to The Welders and for Flying V Theatre Company for a couple of boneheaded reporting errors that I allowed to slip into the print version. (They’ve been corrected online.) Also, apologies to Matt Reckeweg, co-founder of Pointless Theatre Company, which won the Aniello in 2014. He gave me some helpful insights but his comments were regrettably cut from the story for space.

Hey, what happened to my 2014 FringeCasting Couch interview with the cast of Flying V’s You, or Whatever I Can Get?