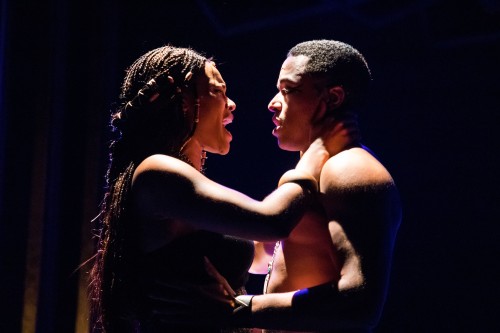 Because three shows had their press nights here in the DMV the same night Constellation Theatre Company opened their version of the Y2K-era Elton John-Tim Rice musical Aida, myWashington City Paper review took a little while to appear. Here it is. The principal actors are better than most of the material.

Face 2 Face with My Beloved Readers

In RE: the latest iteration of Elton John and Billy Joel’s Face numeral-two Face Tour, which played Washington last weekend, the commentariat has spoken. Fifty-three postings when the board shut down, and nine or ten of them actually agreed with my review or spoke up in my defense.

The majority, of course, believed I’d called it wrong.

I suppose we’re never going to see Eye 2 Eye on this one. It seems that most folks willing to pay a C-note-plus (before fees) to see these two relive their glory days are seeking something different from a concert than I am. For many of them, that “something different” seems to be something exactly the same as whatever they got the last time they saw one or both of these guys, in 2003, or 1994, or 1972.

Well, fair enough. For what it’s worth, one of the best music critics in the biz, the Chicago Tribune‘s Greg Kot, reviewed last night’s Face 2 Face date at Wrigley Field, and made many of the same observations I did. He even broke out the epithet “mook,” which one particularly overstimulated commenter came after me for using. END_OF_DOCUMENT_TOKEN_TO_BE_REPLACED

Sing Us a Song, You’re the Piano Repair Man

The umpire calls it: Safe!

Safe as houses. Safe as milk. Safe as Billy Joel’s Greatest Hits. Hey, did Bruce Willis grow a goatee and take up the piano? Wait, that is Billy Joel!

For Nationals Park’s opener as a pop music venue, the reeling concert trade deployed two of its dwindling stock of big guns, Elton John and the “Uptown Girl” guy. The Rocket Man and the Piano Man began co-headlining their Face-numeral-two-to-Face tours in 1994, shortly after Joel stopped writing pop albums.

The lumbering double-header they brought to Washington Saturday night could have been staged in that year without any alteration to the 31-song setlist. END_OF_DOCUMENT_TOKEN_TO_BE_REPLACED