They Mostly Come Out at Night, Mostly: ALIENS, recalled briefly on All Things Considered. 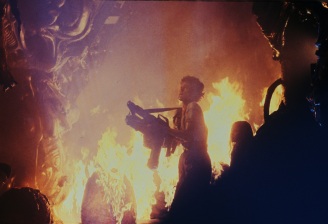 I was thrilled to get an invitation from All Things Considered to blab briefly with the great Audie Cornish about one of my favorite movies on the 30th anniversary of its release: SpaceCamp. No, it was ALIENS. Duh. The segment aired at the very end of an ATC that started off with live audio of the “Roll Call Vote!” chant from the Republican National Convention in Cleveland. They’re coming out of the goddamn walls, just like Private Hudson said.

You can hear the segment here. I had more to say than they could use, but that’s radio, and hey, this is a show primarily devoted to, you know, real news. One of the first pieces I ever wrote for NPR was largely about ALIENS. I have a narrow range of interests, I guess. And Fox just released a new batch of stills and behind-the-scenes photos from the movie, many of which even I have never seen before, so I’m posting those, too. Enjoy. 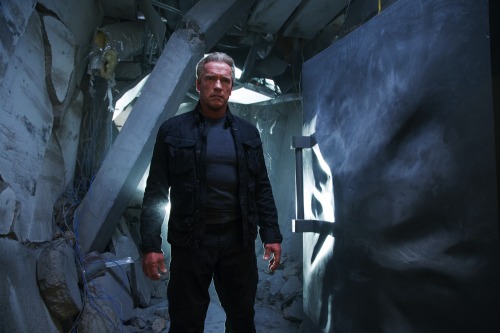 I Skyped in from the Eugene O’Neill Theatre Center in beautiful New London, CT to dissect Terminator: Genisys (sic) — the underwhelming reboot of/fourth sequel to one of my favorite movies — with Pal-for-Life Glen Weldon. While I was taking in this movie in the “Luxury Seating” equipped Waterford 9 Cinemas, several of my fellow Critic Fellows, all ladies, were next door enjoying Magic Mike XXL. My proposal for a double feature was summarily rejected.

The Future Is Not Set: A Terminator Dossier

I haven’t seen the by-all-accounts underwhelming Terminator: Genisys yet, because since I’ve been busy being a “Critic Fellow” at the one-of-a-kind Eugene O’Neill Theatre Center in the wilds of Connecticut. But I did indulge in some quippy dramaturgy on the wandering-ronin Terminator franchise, for NPR.

My review of Deepsea Challenge 3D, the new National Geographic documentary about James Cameron’s historic March 2012 dive to the bottom of the deepest part of any ocean on the planet in a one-of-a-kind sub he co-designed himself, is on The Dissolve today. When he isn’t busy being a real-life Steve Zissou, Cameron is still one of my favorite filmmakers. And I didn’t even like Avatar all that much.

END_OF_DOCUMENT_TOKEN_TO_BE_REPLACED 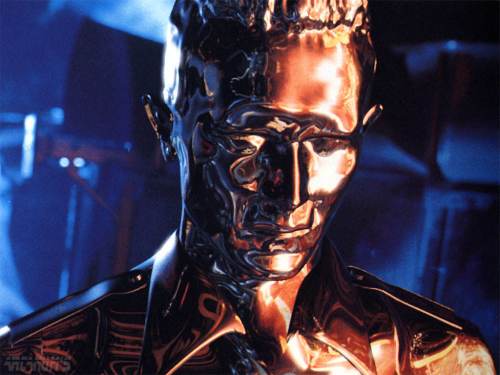 The “mimetic pollyalloy” T-1000 in its transitional state.

Terminator 2: Judgment Day originally had a sunlit coda set on the National Mall in the no-longer-grim future of 2029 with Linda Hamilton in unconvincing old age makeup. Director James Cameron was right to cut it.

My essay about the movie’s villain that ran on The Dissolve last week originally had a rambling 500-word introduction. My editor, Keith Phipps, was right to cut it.

So here it is! END_OF_DOCUMENT_TOKEN_TO_BE_REPLACED

I’ve very proud to have contributed the concluding essay of The Dissolve’s Movie of the Week coverage of Terminator 2: Judgment Day, long one of my sentimental favorites. My piece examines how cowriter-director James Cameron’s decision to disguise the film’s mysterious villain, the advanced T-1000 Terminator played (mostly) by Robert Patrick, as a uniformed Los Angeles police officer anticipated our growing discomfort with police in general and the L.A.P.D. in particular at the start of the 90s. It also explores the film’s ironic connection to the tragic beating of Rodney King by four L.A.P.D. officers near one of T2‘s key locations while the movie was in production. Read the essay here.