Despite Its Pedigree, A Doll’s House, Part 2 Is a Fixer-Upper

I’ve been looking forward to seeing Lucas Hnath’s A Doll’s House, Part 2 for a couple of years. The announcement that the Broadway hit’s DC premiere from Round House Theatre would star the great Holly Twyford as Nora? Music to my ears.

In this week’s Washington City Paper, I try to diagnose why Nicole A. Watson’s production is so bloodless.

After the customary late summer lull, I’m back on the theater beat. Last week’s Washington City Paper featured my reviews of two plays that first appeared in 2015, now making their regional premieres Branden Jacobs-Jenkins’ stunner Gloria, at Woolly Mammoth, and Small Mouth Sounds by Bess Wohl, at Round House.

No Jacket Required, Apparently: Talking Death of a Salesman, In the Heights, and The Wild Party on Around Town

You can see for yourself what a business-casual mood I was in the day Robert Aubry Davis, Jane Horwitz, and I convened at WETA to shoot a fresh batch of Around Town segments. Perhaps you are correct that I should have chosen a shirt that is not the same shade as our studio backdrop. Hey, I don’t tell you how to do your part-time job.

I reviewed Ford’s Death of a Salesman and Constellation’s The Wild Party for the Washington City Paper. For In the Heights, the musical I herein refer to as “Lin-Manuel Miranda’s THX-1138,” I didn’t write about it. I just bought four more tickets the morning after to take my folks. Anyway, because WETA posts videos in a format that WordPress can’t embed, I gotta give you the links: Death of a Salesman, In the Heights, The Wild Party.

Given that Aaron Posner’s 2009 production of Tom Stoppard’s Arcadia at the Folger Theatre, starring Holly Twyford and Erin Weaver (and Cody Nickell and Eric Hissom) remains one of my favorite theatrical experiences, it’s a cinch I’d be susceptible to Posner’s reteaming with Twyford and Weaver in Or, Liz Duffy Adams’ erudite farce about seminal British playwright Aphra Behn. Here’s my Washington City Paper review.

Lemme tell ya, people: It was much easier to figure out why Tony Kusher’s most recent play is lousy than it was to try to figure out why Angels in America, the epic masterpiece that shall be his legacy, is so good. You have countless other, more reputable sources on that, of course. I was just writing about the show’s latest and largest local revival, the product of a Marvel Team-Up between Olney Theatre Center and Round House Theatre.

While researching this review I discovered that Mike Nichols’ 2003 HBO miniseries of Angels in America earned four-stars-out-of-four for its artistic merit and four-for-four for its depiction of the nursing profession on the website The Truth About Nursing. END_OF_DOCUMENT_TOKEN_TO_BE_REPLACED

They can’t all be winners, not even shows from playwrights, directors, and actors whose work you often love. Round House Theatre’s new production of Sarah Ruhl’s Stage Kiss was a bigger disappointment to me given its pedigree than was WSC Avant Bard’s Holiday Memories, but I can’t say either one blew by Christmas stockings off. Your mileage may vary.

In the Flesh: Zombie: The American and NSFW, reviewed. 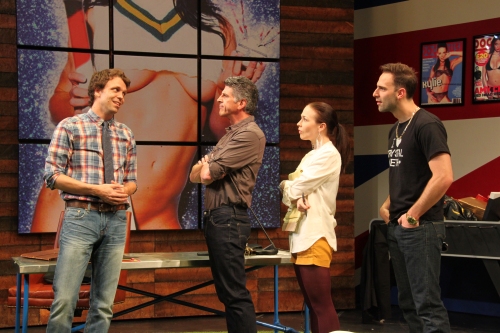 Two satires, each alike in indignation. My reviews of Robert O’Hara’s world premiere Zombie: The American at Woolly Mammoth Theatre Company and Lucy Kirkwood’s 2012 NSFW at Round House Theatre are in today’s Washington City Paper, available wherever finer alt-weeklies are given away gratis.

We’ve got an An-ton of Chekhov in DC just now, what with Arena Stage doing Christopher Durang’s Tony Award-winning, Chekhov-inflected Sonia and Masha and Vanya and Spike, while Round House Theatre has put together a sublime new Uncle Vanya, working from Pulitzer Prize winner Annie Baker’s recent translation of the play.

I review both of those in today’s Washington City Paper. I have seen Live Art DC’s staged-in-a-bar Drunkle Vanya yet, but it’s stumbling distance from my apartment so I should find the time.

FURTHER READING: My 2010 review of Baker’s Circle Mirror Transformation. My 2011 review of Sydney Theatre Company’s Liv Ullmann-directed, Cate Blanchett and Hugo Weaving-starring Uncle Vanya. My 2012 review of Baker’s The Aliens. My 2013 review of Aaron Posner’s Stupid Fucking Bird, and its follow-up, from earlier, this year, Life Sucks, or the Present Ridiculous. Surely that’s more than enough. 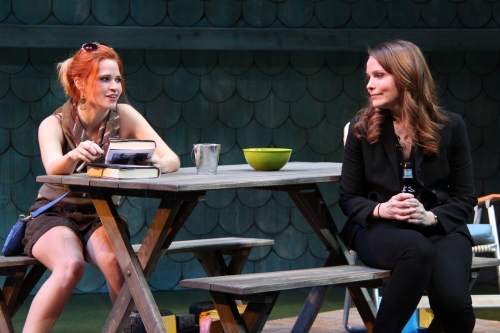 When I saw Round House Theatre‘s production of Becky Shaw two years ago, I found in Gina Gionfriddo a playwright whose humor and unpredictability made me want to read everything she’d written. I got the scripts for After Ashley and U.S. Drag, and I read them both during the same flight. My review of Round House’s new production of her latest – 2012’s Rapture, Blister, Burn – is in today’s Washington City Paper.

My review of Round House Theatre‘s strong production of Will Power‘s Fetch Clay, Make Man, a play about the unlikely friendship of Muhammad Ali and Stephin Fetchit, is in today’s Washington City Paper. I also review Constellation Theatre‘s update of a century-old Luigi Pirandello play, ABSOLUTELY! {perhaps}. END_OF_DOCUMENT_TOKEN_TO_BE_REPLACED

Crone Warfare: Round House’s The Beauty Queen of Leenane, reviewed

My review of Round House Theatre‘s new production of Martin McDonagh‘s first play, The Beauty Queen of Leenane, is in today’s Washington City Paper.

This is why I never wanted to get a real job: Alec Baldwin in “Glengarry Glen Ross: The Motion Picture.”

No stage production of Glengarry Glen Ross feels complete to me without the speech David Mamet added for the movie version, eight years after his play won the Pulitzer Prize for Drama in 1984.  But Round House Theatre’s Mitchell Hebert-directed version is solid if not revelatory. Reviewed in today’s City Paper.

Blame It on Cain: Round House’s Double Indemnity, reviewed 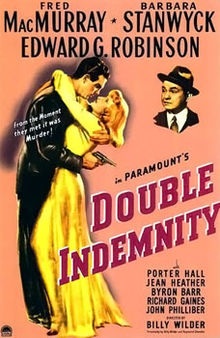 Here’s my City Paper review of Round House Theatre’s production of the stage adaptation of Double Indemnity, based on James M. Cain’s Depression-era serialized novel.

Some plot developments may seem unfamiliar to those of us who only know the story from Billy Wilder’s iconic 1944 film noir, which departs from Cain’s structure in ways that’re all to the good. There’s nothing wrong with this play, really, but it’s hardly an essential document the way Wilder’s movie is.

This is going to take some explaining, so please be patient.

Round House Theatre’s production of Thomas Gibbons’s Permanent Collection, about a racially charged struggle for control of a museum, doesn’t open for three weeks. But the Phillips Collection is hosting a preview of selected scenes this evening. Why the Phillips? Because it’s about to close Man Ray, African Art, and the Modernist Lens — a brilliant, unconventional exhibit that touches on many of the same issues vis-à-vis how race impacts art’s perceived value that Gibbons’s 2004 drama does. END_OF_DOCUMENT_TOKEN_TO_BE_REPLACED